Finding patterns, repeatability and historical cyclicality is one of the main tasks of a trader. Some use graphic patterns to look for the silhouettes of geometric shapes. Some study the characteristic price movements: acceleration, braking, and interaction with graphic objects. However, there is a huge category of traders who are engaged in technical analysis of Forex using indicators. They allow you to predict the market, study its various characteristics and use these patterns in your own trading. Even beginners who have just heard about the existence of technical analysis will be able to analyze the market with their help.

One of the largest categories of the entire variety of instruments is Forex trend indicators. They are based on a simple pattern of price movement, namely, the tendency to trend movements.  A trend is a forward movement of the price up or down, in which the rewriting of extremes is characteristic. It is formed under the influence of majority positions in the market when there is a prolonged imbalance between buyers and sellers.

By identifying a trend, you shift the likelihood of success of the trade to your own direction. We will tell you in this article what Forex trend indicators are used for, what you should pay attention to when working with them, and what place they can take in the trading system.

The overwhelming majority of books on technical analysis are based on the fact that the trend is the basis around which strategies are built. You should always stick to its direction and open trades in its direction. A trader must be able to identify it and build trading in its direction. However, it is difficult to determine it in a timely manner and without errors.

This is due to market noise, which blur the overall picture of what is happening. Trend indicators were created to combat it, that, depending on the formula embedded in them, average the price or in other ways indicate the global price movement, helping to determine the direction of future transactions.

Most often, their use is reduced to the filter function in the strategy, when the signals from the oscillator are matched with a global trend. For example, it can be a bundle of EMA and Stochastic, RSI, any other indicators of building channels and levels can be used. If they match in their readings, a trade is opened, and in case of a discrepancy, a trade should not be opened.

In addition to the filter, they can give signals to enter the market. This could be both a change in global and short-term trends. One way or another, indicators of this type can be a source of data for opening future positions by a trader.

In some cases, trend indicators can also be used to set Stop Loss. A prime example is setting a stop order under EMA, where the indicator line is the main pointer to limit risk.

Technical Analysis is world famous for its range of instruments around the world. A huge number of custom developments allows you to create a wide variety of trading systems. As mentioned above, a trader can take any trend-type instrument as a basis and attach an RSI indicator or any other oscillator to it. As a result, you get a balanced basis for developing a trading strategy.

The following TOP-3 trend indicators on Forex can be distinguished among all the tools that the MetaTrader terminal allows you to use. This is Moving Average, MACD, Bollinger Bands. They are present by default in all existing terminals and are considered standard. By the way, NordFX broker allows you to work with them through the MT4 terminal, which can be installed not only on a computer, but even on your mobile phone.

The Moving Average indicator is a classic trend indicator that draws a price line on a chart by averaging its value over a specified number of candles. SMA is considered a basic tool for technical analysis. First, it is a medium-arithmetic value, easy to calculate, and therefore was created one of the first. Secondly, many modifications and other indicators have been created on its basis. Thirdly, a trader can implement absolutely any strategy on its basis (Fig. 1). 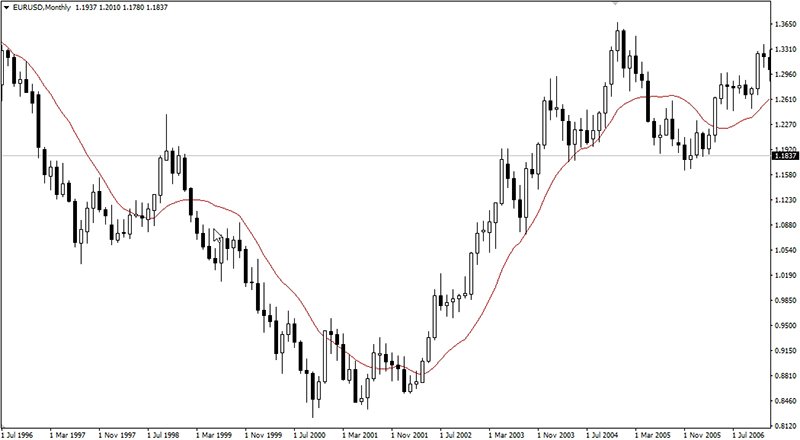 There are several types of moving averages:

It is difficult to see the difference between them  at a first glance. The fact is that they differ in the type of price averaging, which entails some differences in sensitivity and lag. The last one on the list is the slowest and roughest of market noise. EMA is on the contrary the fastest and is more commonly used in practice.

The line you see on your chart can generate the following signals:

We also want to pay attention to the angles of inclination and the position of price relative to the line. If it is above the line, the current trend is upward, if it is below the line, it is downward. It is worth reminding once again that in strategies Moving Average is almost always used in tandem with oscillators: Stochastic, RSI and others, which help to determine the beginning, continuation or end of the current trend.

A simple example of how the Stochastic indicator exits the overbought zone confirms a downtrend in the SMA and gives a command to open a sell trade is shown in Figure 2 below: 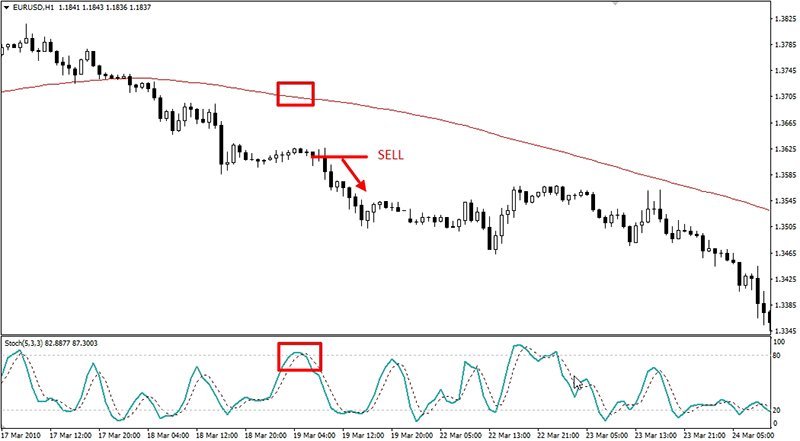 This indicator is sometimes mistakenly considered an oscillator. This is not the case, because it is based on price averaging. The MACD algorithm is based on the convergence and divergence of two Moving Averages, and the histogram shows the distance between them. So MACD, unlike Stochastic or RSI, is not a stochastic oscillator, but a classic trend indicator (Fig. 3). 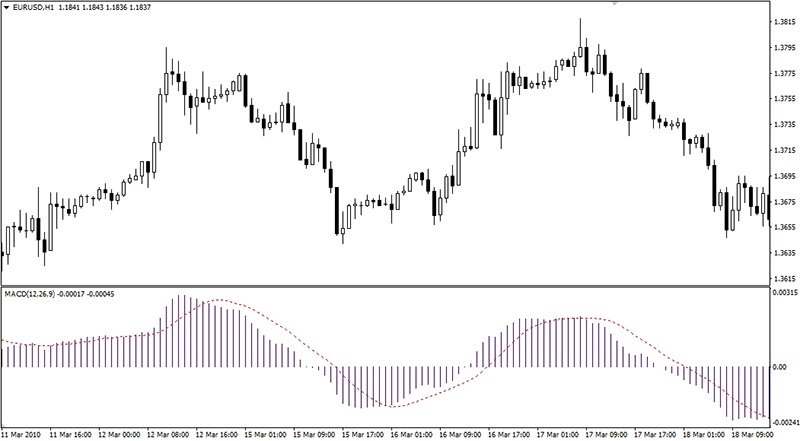 It is a huge source of signals, as it is able to find short-term and medium-term changes of the trend, generate signals to change the global trend. Its most formidable weapon is divergence. It has become a common signal for a huge number of Forex indicators.

Divergence is a reversal type of signal that is formed due to the mismatch of the extremes of the instrument with the real price. Simply put, if the price curve is still going down, and the indicator curve has already turned upstairs, this is a strong signal that the trend reversal should soon be expected. Thus, MACD, like other reversal indicators, is able not to post facto, but to warn in advance about fractures in price movements. The example is given in Figure 4: 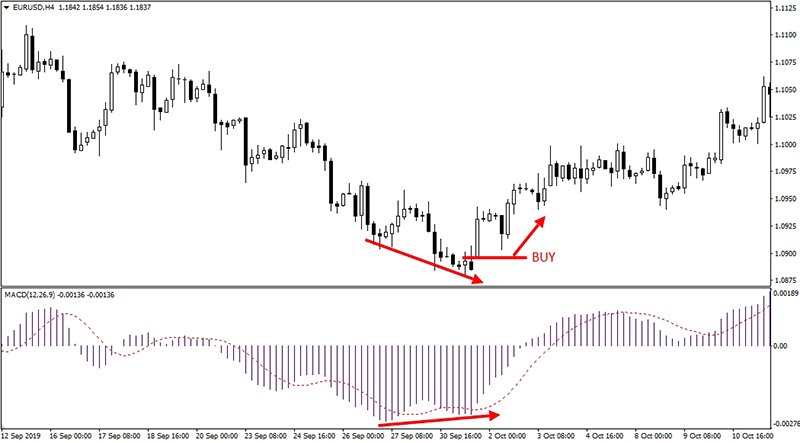 You can see divisions above and below the 0.00 mark on the histogram. At moments when the graph crosses this zero line, a global trend change is fixed. It is clear that if the intersection occurs from bottom up, then the trend has changed from downward to rising. Accordingly, at the reverse level crossing, the trend changes from ascending to descending.

Also note how the MACD histogram interacts with the signal red dotted line. Their intersection generates a signal of a short-term change in the price movement and helps to determine the moment for opening orders either for buy or sell (Fig. 5). 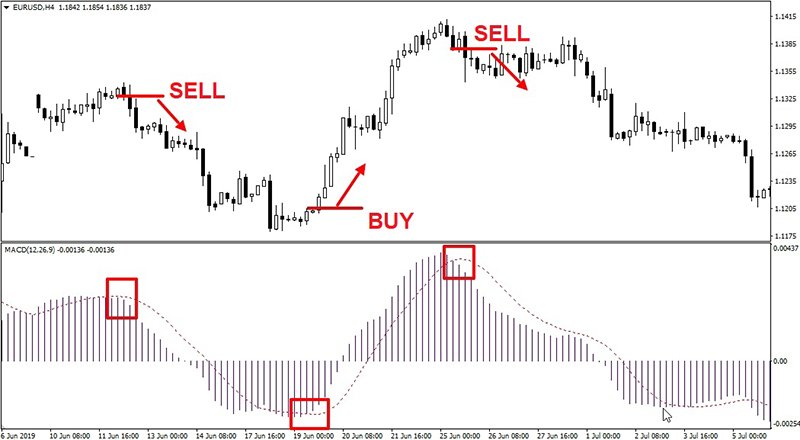 Some Forex traders use this indicator not only together with other technical analysis tools, but also on their own. This is explained by the strength and accuracy of the MACD signals, especially if divergence occurs on the chart.

Bollinger Bands round out the top three Forex trend indicators. They are an ordinary moving average, at a distance from which a trading range is built. It is interesting that this indicator is able to find and give the trader information not only about the direction of the trend, but also about the market volatility, as well as give signals to pull back from the boundaries of the range (Fig. 6). 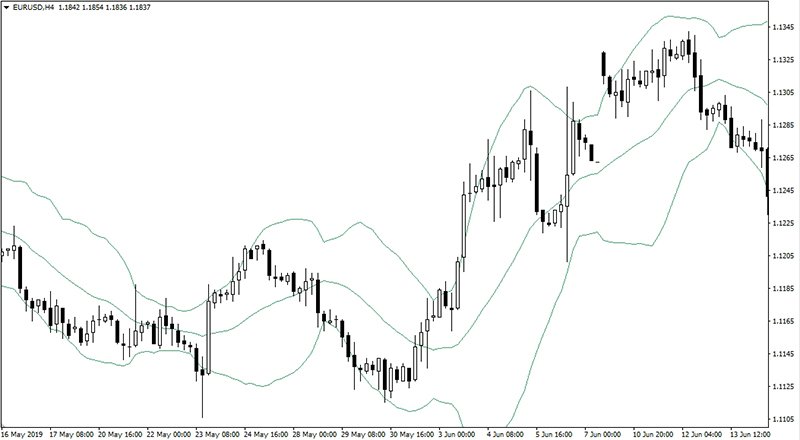 Bollinger Bands demonstrate the strength and potential of the trend with its range. When the channel narrows, a transition from trend to flat or accumulation stage should be expected. Expansion, on the other hand, indicates an increase in volatility and trend activity. Trading can be based on the interaction of the indicator lines and the price, which can bounce back from them, break them or test them. This allows you to trade either on the break, or on the breakdown of the range. Both options will be correct. An example of how the Relative Strength Index indicator works in tandem with Bollinger Bands to rebound from the range boundaries can be seen in Fig. 7: 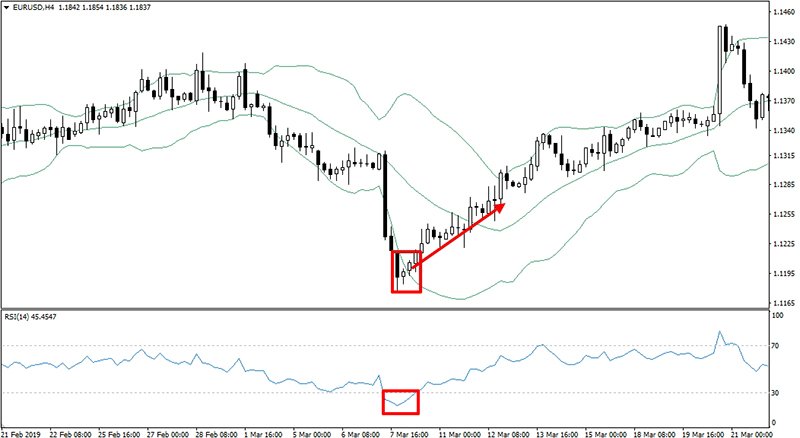 The strong point of trend indicators is the ability to cut off minor price fluctuations and identify the main trend of its movement. Фlmost all trend instruments use the averaging algorithm to combat market noise. On the one hand, it frees you from noise, makes the market picture clearer and more understandable. On the other side of the scale is the signal delay. Moreover, the more noise the indicator cuts off, the more delayed its signals.

It should also be borne in mind that signals such as, for example, divergence, can occur quite rarely. Therefore, having missed one such signal, you can wait a long time for the next one to appear. Especially if you trade on large time frames.

However, the usefulness and effectiveness of Forex trend indicators is beyond doubt. They allow not to be mistaken with the global direction of the price, due to which they are able to become the basis of a high-quality trading strategy and bring stable profits both in manual trading and in automatic trading with the help of robot advisors.